Investor and Analyst event, The Road Ahead for Imaging Radar.

On December 7, 2021, Arbe held its first Investor and Analyst event, The Road Ahead for Imaging Radar. The virtual event presented attendees with an opportunity to learn about the fast-growing imaging radar market directly from independent industry experts, gain perspective about how automotive companies and tier 1s are leveraging 4D Imaging Radar to revolutionize their safety applications, and deepen their understanding of 4D Imaging Radar technology, its capabilities, and how it is transforming perception for autonomous applications. The event boasted an impressive roster of panelists, including representatives from GM, Ghost, Qamcom, Frost & Sullivan, as well as Arbe. A full recording of the event can be accessed here.

The event kicked off with a presentation from Arbe CEO, Kobi Marenko, providing an update on Arbe’s activities and projections.

The transcript of the presentation is provided here. 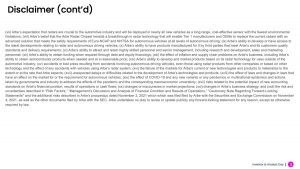 We are Arbe, the only 4D radar company in the market, and the only pure-play public company, traded on Nasdaq. We are driving the radar revolution, paving the way for fully autonomous driving.

Arbe is the first company to develop an imaging radar based on a proprietary chipset. Our chipset includes 3 chips: a transmitter, receiver, and our unique and dedicated radar processor. The processor enables us to process 10 times more information than any other radar processor chip, with lower power consumption at a lower price. On top of the radar, we also developed the first perception software that allows full free space mapping based on the radar alone, and with that we are leading the market towards an autonomous future.

We are 115 people, most in the R&D center in Tel Aviv. Our sales and customer support are in Germany, the US and China.

Our mission starts from safety. The first goal of our radar is to improve the safety of the entire vehicle system: to allow autonomic braking in any conditions, to enable safe adaptive cruise control, lane-change assist, and many other advanced features, scaling up with the industry’s evolution towards full autonomous driving.

We have 30 customers from full design-ins to pre-production projects and companies that have purchased a low volume of units and will make decisions on scale in the coming quarters. Based on a subset of those clients, we expect more than 300 million dollars of revenue in 2025. We are targeting the next generation radar market, and expect radar to represent the largest total addressable market of any autonomous sensor, at around 11 billion dollars in 2025. 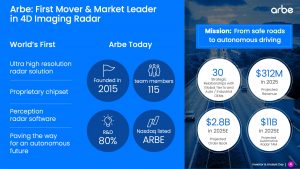 Radar has had ups and downs in the automotive industry.

Starting about 15 years ago, there was a lot of hype about how radar was going to change the industry. Development focused mostly on blind spot detection and adaptive cruise control on one hand, and reducing the price on the other.

But by the time we founded Arbe, the general industry consensus was that radar had already achieved as much as it could. It was believed that LiDAR was more promising for advanced applications. However, as time went by, it became clear that achieving high performance LiDAR at a reasonable price was a fantasy. Further, LiDAR is unable to reach performance targets at necessary ranges, and does not function well in bad weather or when the sun shines directly on the sensor.

In the past few years, we are seeing a paradigm shift back to radar and a majority of OEMs are beginning to understand that imaging radar is the key for any kind of level 2+ and level 3 applications. We believe that in the next few quarters we will start to see announcements from the largest companies, choosing to base their major stack on Imaging Radar and camera.

Imaging Radar is not an “improved radar,” but a completely new sensor, as this chart illustrates. It delivers all the advantages of traditional radar, and enhances them with real, physical, high resolution in 4D. This allows our technology to support the development of perception algorithms, and to deliver much higher value to the industry.

We saw affirmation of our strategy a few months ago, when Intel Mobileye announced that by 2025 they will have exactly the same number of virtual radar channels on their radar. We intend to maintain that three year lead, and by 2025 we should already have our next gen product, but I do expect this market may become a two-horse race between Intel’s solution and our solution.

Still, at the moment and for some time, we have the only ultra high resolution solution!

Here you can see our 4D radar in action:

A main mission of this radar is to build full free space mapping based on the radar data, meaning the car can see the entire environment, a full 360 degrees, as well as all of the stationary objects and all of the moving objects. It can define the range and the velocity of all of the objects around it, including stationary objects, which existing radars have always struggled to do. This is what enables the entire path planning, and eventually autonomous driving. This solution is based on our real, high resolution point cloud, and on top of that, our proprietary machine learning. This entire stack runs on our dedicated proprietary processor, Everest.

Arbe is currently at the stage where we have a full working chipset, engineering samples, and radar sample that we designed to show the abilities of this radar, as well as several tier 1s building the full production version.

We received major announcements from big car companies who plan to adopt our technology. Recently BAIC, one of the largest car companies in China and one of Arbe’s investors, announced that our sensor will be brought to the market by Hirain, a Chinese tier 1, and will eventually be in every one of BAIC’s level 2.5 and level 3 cars. AutoX, the leading robtaxi in China and one of the first movers in the United States, announced that all of their cars will use Arbe’s radar — an anticipated 400,000 units in the next 5 years. A few months ago, one of the top 5 car manufacturers selected Arbe and Valeo as a tier 1 for a pre-production project that will lead to design selection next year. Hyundai Mobis recently announced that they are conducting a large-scale pilot with Arbe’s tech for level 2+ and level 3. Hyundai is also an investor in Arbe.

Finally, a new announcement that we haven’t spoken about yet is that a very large, top 10 OEM has selected Arbe for AI-based radar technology for perception, which validates our strategy — introducing perception based on radar.

Next year, we are targeting to win 8 customer contracts out of the 20 customers currently in advanced evaluation. If we succeed in obtaining these wins and our current design-ins, we expect to reach our 300 million dollar revenue goal for 2025.

Tier 1s are a major part of Arbe’s strategy. We are going to production through our Tier 1 partners and are currently shortlisted with 4 out of the leading 5 radar tier 1s in the US and Europe, and we expect at least 2 selections to come through the next quarters. Today, 4 major tier 1s are developing radar systems based on our technology.

All of the industry is talking about a shortage of chips, so it’s important to understand that one of Arbe’s major advantages is our relationship with GlobalFoundries. We are one of the strategic customers of GlobalFoundries, and we are the first company to go production with chips that are automotive grade based on their 22 nm process. GlobalFoundries has committed to performing the qualification and characterization of Arbe’s chipset, as well as the production line, and has taken full ownership of final chip testing and managing the supply chain.They are guaranteeing the supply we promised to our customers for the coming years. For as long as this silicon shortage lasts, we will have the capacity, we are here, and the larger issues with chip availability will not impact our business. 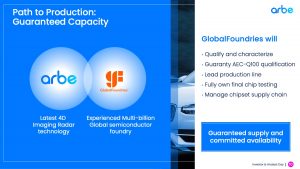 Arbe’s major strategic goal for 2022 is to go to production with our chips. This is an ambitious plan, supported by GlobalFoundaries. We are confident we will reach that milestone. Our Tier 1s partners are following closely, and they are in the advanced stages of a plan to take a full radar model to production in parallel. In China, we will be in production by the end of Q4 as our tier 1s have announced, and in Europe and the US we believe it will be in the 2nd half of 2023.

We are excited to report a solid quarter of continued operational, technological, and strategic progress. Our technology has us way ahead of the competition on performance, cost, quality and safety, to the point where we are being treated as a reference standard. We also consider our time to market advantage to be critical. Interest in imaging radar technology is steadily penetrating adjacent markets. Increasingly, adoption of next generation radar systems is becoming more obviously inevitable, and not just in the automotive industry.

We are deeply confident in our vision for this market. That confidence is not based on short-term markers like quarterly performance for the auto industry or even our own, which of course can vary. Our confidence isn’t dependent on the macro environment; it won’t be shaken if we don’t win a particular customer. Our confidence is based on how everything we see and continue to verify — both from the bottom up and from the top down perspectives — points to a simple answer: High definition imaging radar is about to change the auto market, and then it is going to work its way into many other markets and change them as well. A revolution is coming, and we intend to maintain our place at its cutting edge. That’s why we have confidence in our future.